Land trusts have conserved more than 2.5 million acres of Maine. As Maine celebrates its bicentennial, it is important to reflect on a lesser-known resource on these lands – the many cultural and historical features that have been protected. Across the state, Maine land trust conserved properties tell our collective story: the good and the bad, the famous and the obscure, the distant and the recent. 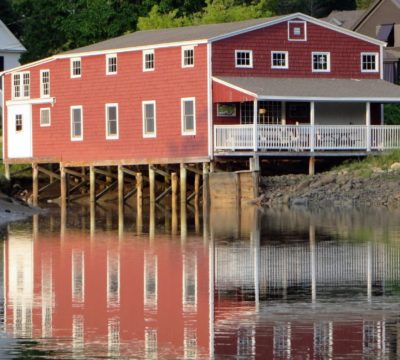 This historic property includes public access to beautiful Mast Cove, the site of the Perkins Grist Mill and  the Clement Clark boathouse.  Set within walking distance to Kennebunkport’s Lower Village, the Grist Mill is a unique setting where visitors can learn about colonial history, boat making, lobstering, the importance of the Kennebunk River, and how all of these things molded Maine and the community over time. 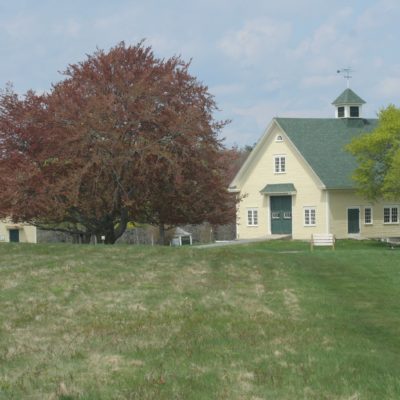 Now the headquarters of the Wells National Estuarine Research Reserve, this high point between two rivers had been farmed for more than three centuries before falling into disrepair. A grassroots movement to protect and restore the farm resulted in the formation of Laudholm Trust and partnerships that preserved the historic site. Today, it is part of a 2,250-acre center for science, education, conservation, and public enjoyment—the Wells Reserve at Laudholm.

Ice Pond Preserve features a 2-acre pond created about 100 years ago in order to harvest ice in the winter. The ice was sold to the hotels on Peaks Island during the summer season and stored in a large icehouse until needed. By mid-century, refrigeration eliminated the need for ice harvesting and the pond became a favorite spot for ice skating, located on the back shore of Peaks Island and with ocean views to neighboring islands.

Battery Steele is an enormous concrete gun emplacement (two 16″ naval guns) built by the government in 1942 to prepare for the potential of German warships approaching Portland Harbor. After the war, the battery sat largely idle until 1995, when the then-owner listed the 14-acre property for sale. Fearing that it would fall into private hands and be developed for private housing, a group of islanders formed the Peaks Island Land Preserve to buy this historic site.

Although the 101-acre Mast Landing Audubon Sanctuary is primarily a wildlife sanctuary, the site features a well-built 150 foot long stone dam and remnants of stone foundations of several mills, dating to the mid-1700’s. Mast Landing, as the name implies, was located near the spot where pine logs for the mast trade began their water voyage to England. With the help of an Eagle Scout candidate and the Freeport Historical Society, interpretive signage has been installed to describe the history of the site.

The Chebeague and Cumberland Land Trust works closely with the Town of Cumberland on the management of Broad Cove, a coastal reserve with a long history of human use beginning with Wabanaki who fished here. In the early eighteenth century the property was home to the town farm where less fortunate residents could live, grow food, and perform other work to cover the cost of their care. The property was sold to a series of private families who built homes. Then in 2014, the town acquired a portion of the property to establish the reserve, which today is open to the public for walking, fishing, boating, and swimming. 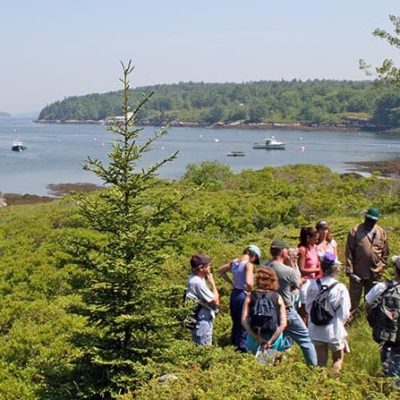 Malaga Island in Phippsburg was home to a mixed-race fishing community from the mid-1800s to 1912 when the residents were forcibly removed by the State of Maine. Since acquiring the island, MCHT has worked with various partners, including the University of Southern Maine, to better understand the island’s archaeological history and to help share this unfortunate story from Maine’s past. On the island, you will find more information at the kiosk, which offers a glimpse of those who once lived here and a brief description of the cruel eviction they endured more than a  century ago. 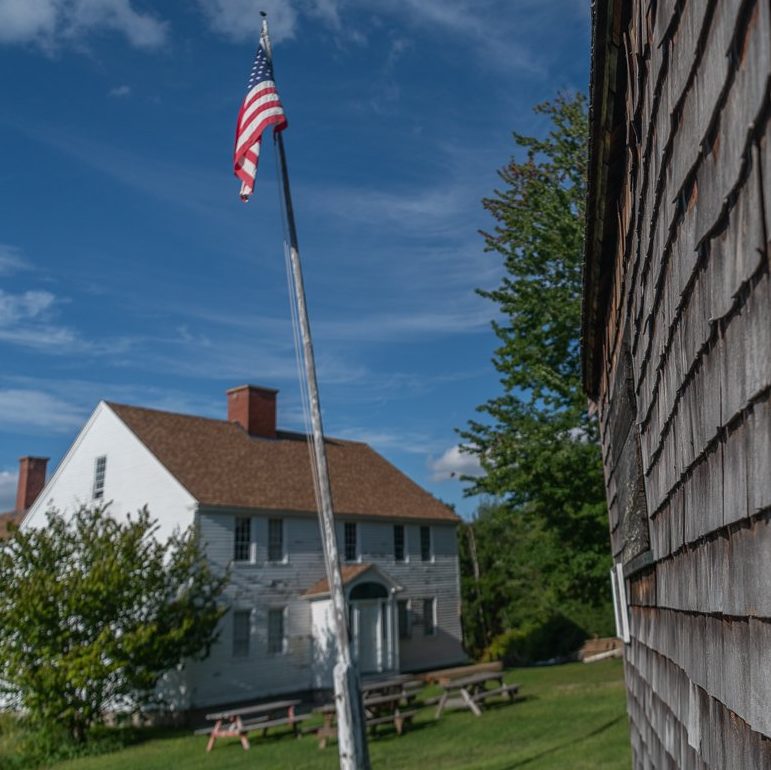 Peabody-Fitch Woods is a 252-acre Loon Echo Land Trust forest preserve that surrounds the fields and historic home of the Bridgton Historical Society’s Narramissic Farm. In 1797, both of these properties were owned by William Peabody, one of Bridgton’s first settlers. Today, they offer a glimpse of New England on the eve of the Civil War. Visitors can hike to a granite quarry, see a restored blacksmith shop, and tour the house, furnished largely with items original to the property. 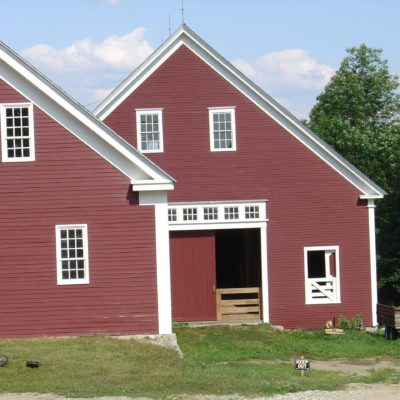 In 1850, 5,000 members of the Shaker religion lived in communal villages from Maine to Ohio. Maine’s last practicing Shakers reside at 1,700-acre Sabbathday Lake Shaker Village in New Gloucester. The property, which has a conservation easement held by the New England Forestry Foundation, was a joint effort that included The Trust for Public Land, the Royal River Conservation Trust, and the Land for Maine’s Future program. The Shaker Village is open to visitors, who are invited to tour its historic buildings and learn about traditional Shaker crafts, or picnic, hike, or cross-country ski in the surrounding forests. 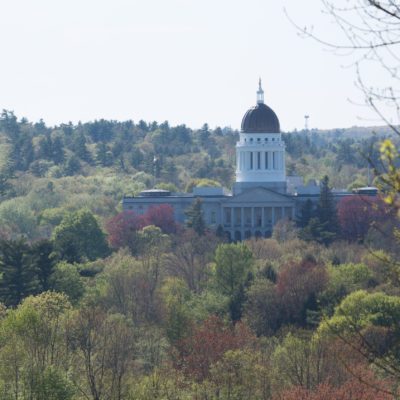 The wooded backdrop to the Maine State House, Howard Hill is a large and diverse natural area in the middle of Augusta. In the 1890s, William Howard Gannett developed “Camp Comfort” on Howard Hill. Carriage trails, ponds, and a two-story treehouse, were features of what was known as “Ganneston Park.” A State Game Preserve from the 1930s to 1969, Howard Hill was acquired by The Kennebec Land Trust in 2016 with funding from the Land for Maine’s Future program. The land trust and the city co-manage the property today. Visitors can explore trails that lead to scenic views of the capitol dome. 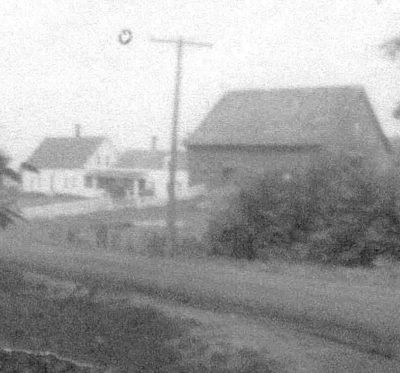 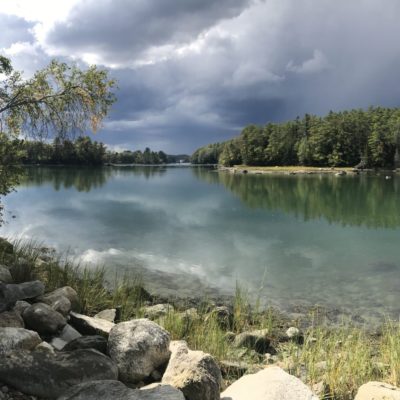 This site once contained a massive oyster shell midden formed by Native Americans over a period of more than 1,000 years. The shells were processed for chicken feed in the late 1800s, leaving behind just a fraction of the original mounds. Owned by the Maine Bureau of Parks and Lands, the Whaleback Shell Midden is operated cooperatively with the Coastal Rivers Conservation Trust, who owns the adjacent Pete Noyes and Round Top Farm Preserves. Visitors can tour all three properties through a network of interconnected trails that extends to the local school. 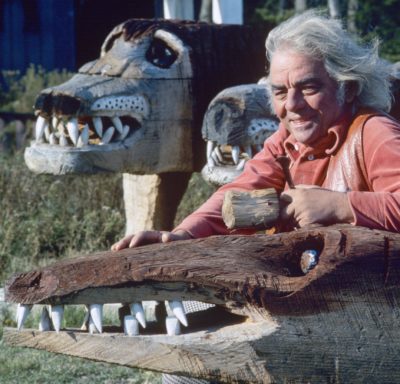 The Langlais Sculpture Preserve was the 90-acre homestead of renowned Maine artist, Bernard “Blackie” Langlais and his wife Helen. “Blackie” created more than 3,500 indoor and outdoor works of art during his lifetime that are unique, edgy, very imaginative, and engaging to young and old alike.

The Phippsburg Land Trust’s Noble Hill Preserve includes the remains of a fort built in 1734 and a portion of the Noble/Lithgow farm established in that period. Settlers constructed Fort Noble on a site that provides prominent views of the Kennebec River, allowing them to see anyone arriving from north or south. 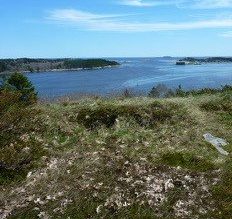 Located in Phippsburg, the Wilbur Preserve protects the southern half of Cox’s Head, the site of Revolutionary War and War of 1812 militia efforts due to its prominent view of the mouth of the Kennebec. In 1814, a British ship stopped here and caused a large local mobilization. Earthworks built by hand by local soldiers remain on the summit today.

During the second half of the 1800s, Pulpit Harbor was the epicenter of North Haven’s population. Farms thrived nearby, fishing schooners filled the deep, protected harbor, and homes, boat shops, several stores, a school, and a post office lined the shore. Today, a small slice of the historic harbor remains on this small conserved property where a public landing, harbor views, relic rock-rubble foundations, and an old wagon road remain. The property is brought to life through a partnership with the North Haven Historical Society. 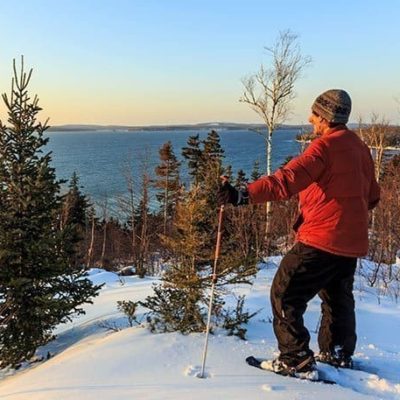 Witherle Woods has a long history of human activity that goes back at least as far as colonial times when the French used the site as a trading post, fort, mission, grazing area, and for recreation. During the nation’s earliest days, Witherle Woods witnessed military action during both the Revolutionary War and the War of 1812. In fact, archaeological research has located fortifications from both events. 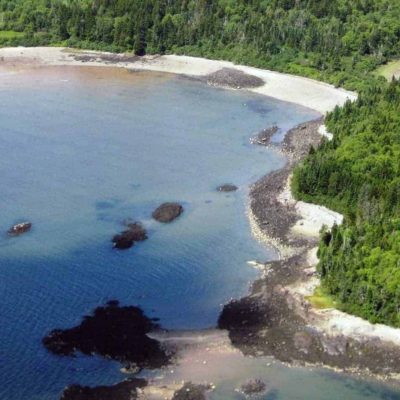 The Long Point Preserve sits in the heart of Machias Bay, which enjoys extraordinary archaeological and cultural resources dating back thousands of years. Part of the ancestral homeland of the Passamaquoddy, Machias Bay was also the site of the first naval battle of the Revolutionary War. MCHT partners with the Passamaquoddy Tribe, the State Historic Preservation Office, and the University of Maine to monitor and protect the cultural and historic resources of the Long Point Preserve and Machias Bay.

This property was a mill site for river drives as captured by John James Audubon in his essay The Power of the Waters, written after he visited there in 1830. As the Atlantic salmon recovered, the Dennys River Sportsman’s Club was founded and soon welcomed famous guests including boxer Jack Dempsey and Ted Williams. The Downeast Salmon Federation acquired the club in 2015 as it continues the effort to restore salmon to the river. 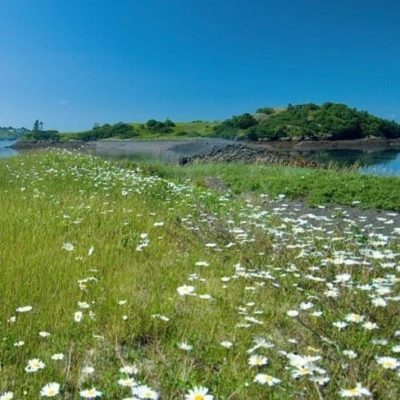 Recorded history on Treat Island began in 1784, with the establishment of a trading post by Revolutionary War Colonel John Allan. Under the ownership of Upham Stowers Treat, in the 1840s, the island was home to a small fishing hamlet whose residents fished from weirs and smoked fish. During the US Civil War in the 1860s, an artillery battery and barracks were built to guard the Western Passage of Passamaquoddy Bay. By 1935, the US Government had acquired Treat Island in preparation for the development of the Passamaquoddy Tidal Power Project. The project was discontinued after only a year, but during that time a clay-cored, rock-filled dam was constructed between Treat and Dudley Islands.