On November 8th, Maine voters will be heading to the polls to elect 186 individuals who will comprise the state’s 131st Legislature. Due to term limits and other factors, more than 40% of this year’s winners will likely be serving their first terms when they arrive in Augusta in early December.

To begin the process of ensuring the next legislature is well-informed on conservation issues, Maine Coast Heritage Trust (MCHT), The Nature Conservancy (TNC), and the Sportsman’s Alliance of Maine (SAM) joined together this fall to organize gatherings with Maine Land Trust Network members in Western and Midcoast Maine. We invited candidates in each region to learn more about the many ways conservation organizations are partnering with each other and with local businesses, municipalities, and community leaders to make Maine a better place to live, work, and raise a family. 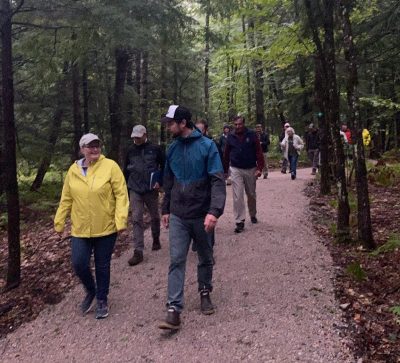 The first event took place on a rainy September afternoon at Pondicherry Park in downtown Bridgton. There, a bipartisan group of candidates gathered under the park’s welcoming covered bridge. Loon Echo Land Trust and a local contractor talked about the recent completion of the universal-access trail that continued north through the inviting forest. This was followed by a presentation by a local ATV club working with Greater Lovell Land Trust to expand the existing trail network. A registered Maine guide then expressed his appreciation for Mahoosuc Land Trust’s efforts, which have support his growing business – a theme that continued as Inland Woods and Trails described the region’s economic vision of developing a four-season destination with interconnected recreational trails.

A few weeks later, on a picture-perfect October afternoon, the second candidate gathering took place at the Coastal Rivers Conservation Trust’s Round Top Farm in Damariscotta. A good mix of Democrats, Republicans, and independent candidates were in attendance to hear the five land trust presentations. Coastal Rivers introduced a local third grade teacher who described how student access to the conservation trust’s preserves help augment her lesson plans. Then, Boothbay Region Land Trust and a local innkeeper focused on the benefit of protected lands to local hospitality businesses and the community’s quality of life.

Both meetings included updates from MCHT, TNC, and SAM, a partnership that has played an integral role in the reinvigoration of the state’s Land for Maine’s Future (LMF) program. Last year, the three statewide organizations worked with Governor Mills, legislative leaders from both parties, and other supporters to secure $40 million in new LMF funding. Thus far, the conservation program has allocated more than $15 million to support 36 projects around the state. Many of these new conservation opportunities are being led by Maine’s Land Trusts in partnership with state and municipal governments.

After hearing an hour of presentations, participants enjoyed relaxing tours of the respective conserved properties. Each was a great opportunity to experience family-friendly recreational trails while briefly seeing a common way conserved properties are benefiting Maine people across the state.

Any time of year is a good time to reach out to candidates or legislators from all parties in your region at any time of year. Invite them out to a trail or preserve and talk to them about the important work the land trust does in your community. MCHT’s Public Policy Manager Jeff Romano is always available to help you connect with the right people and craft the messages you want to share, building relationships to support conservation interests in Augusta.